Did you know that there will be a talk on Pierre Soulages in Bath next Saturday?

Pierre Soulages, painter and engraver ( peintre et graveur), now well in his nineties has a museum named after him in Rodez, Aveyron where he was born.
Julie, who is an historian of French art ( spécialiste en histoire de l’art), will talk, in French,  about his work and show lots of photos of his paintings.
Pierre Soulages discovered Cézanne and Picasso in Le Louvre in the 40ies ( dans les années quarante), their works were a revelation to him and made him decide to go back to Rodez to paint. This is when he started on his abstract paintings dominated by black.
Since then he has been playing on the reflection of light  on black surfaces, this gives his work a gleaming quality. Pierre Soulages says:
” I don’t work with black, I work with the light that reflects it.”
His style is referred to as “noir-lumière” or ” outre-noir” ( beyond black).
He believes in the primal instinct to create and in the spiritual power of lines and movement. 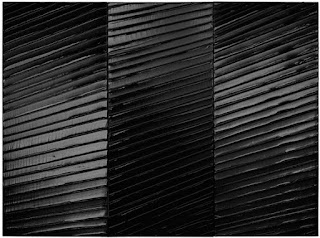 If you would like to find out more about his work and see some of it, well, if you can’t go to Le musée Soulages in Rodez which has the biggest collection in the world of his paintings, come to Bath next Saturday: For more info…