Did you know that des régions in France are given new names?

France is divided into many different layers, so much so that it is called le mille feuilles, for those of you who like going into French pâtisseries, you will know this delicious looking cake which is made of lots of layers of puff pastry with crème pâtissière in between and lots of icing sugar.
To come back to France and its layers and to keep it simple, let’s just mention la commune, le département et la région, leaving out le canton for instance.
Les régions appeared in 1982, there were 22 of them in Metropolitan France including Corsica and five overseas like La Guadeloupe and Mayotte.

François Hollande government decided to reduce the number of regions from 22 to 13. Some of the regions have stayed the same whereas some others have been amalgamated, for these, new names have to be chosen by 1st July.
It is not an easy process as there are quite different opinions, here is what the cartoonist Bidu suggests: 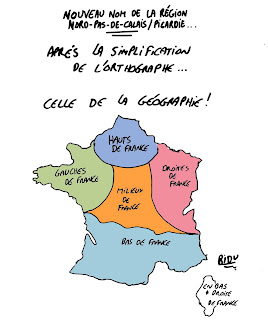 Here is where we are up to now: 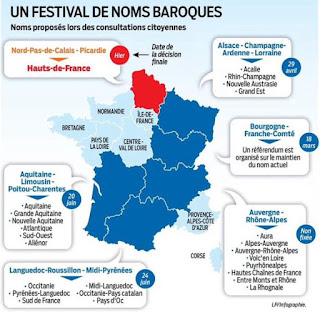 What do you prefer???
Simplication can be tempting!!!!
Don’t forget that our next French drama workshop, in Bristol, is starting soon, for more info…